Its crazy how you women are so obsessed with interracial couples.

TheEducator said:
Its crazy how you women are so obsessed with interracial couples.

TheEducator said:
Its crazy how you women are so obsessed with interracial couples.

Yet they all identify themselves as black women ...Lena Horne parents were biracial just like both sets of my grandparents...doesn't make me any less black

Her biological father is said to be Afro-Latin American percussionist Pete Escovedo Jr., whose sister is singer Sheila E.
Click to expand...

I find [the term biracial] offensive. It’s a way for people to separate themselves from African-Americans….a way of saying ‘I’m better than that’. I’m black because that’s the way the world sees me.
Click to expand...

Lena Horne was born in the Bedford-Stuyvesant neighborhood of Brooklyn. Reported to be descended from the John C. Calhoun family, both sides of her family were a mixture of European American, Native American, and African-American descent, and belonged to the upper stratum of middle-class, well-educated blacks, some of whom were mixed race. Her father, Edwin Fletcher "Teddy" Horne, Jr. (1892–1970), a numbers kingpin in the gambling trade, left the family when she was three and moved to an upper-middle-class black community in the Hill District community of Pittsburgh, Pennsylvania.Her mother, Edna Louise Scottron (1895–1985), daughter of inventor Samuel R. Scottron, was an actress with a black theatre troupe and traveled extensively. Scottron's maternal grandmother, Amelie Louise Ashton, was a Senegalese slave.
Click to expand...

Samuel Raymond Scottron was a prominent African-American inventor from Brooklyn, N.Y. who began his career as a barber. He was born in Philadelphia in 1841. He received his engineering degree from Cooper Union in 1878.

He was a community leader in New York, setting up organizations to promote racial harmony and fairness, as well as a public speaker and writer on race relations. He was a member of the Brooklyn board of education, and a leader in the Republican Party. He fought for the end of slavery in Cuba and Puerto Rico.
Click to expand...

yet you don't consider her black...k:

DerMonger said:
Just like I said these photo's illustrate the black women's attempt at interacial dating success is almost entirely limited to the white man.

Oh but Janet (on her 3rd or is it 4th marriage?) is that 1% of women in this thread that managed to buck the trend and snag a Arab billionaire.

When thinking of venturing to other various races.....good luck with those odds sistas,lol.
Click to expand...

lol.. you need to get out man.

You just spilled arsenic in this thread with that photo....lol

triniameri said:
She may have her faults but her Bangladeshi (Asian) husband still loves her and her daughter from a previous relationship
Click to expand...

I see Bengali men with Black women all the time.

i literally was thinking whyyyyyyyyyy with that pic lol
D

Yeah...she just like a lotta these black women pictured and in real life...fading 40 somethings with nowhere else to go at that stage of her life. Better to take what she can get than be a ole gray haired loner. 20 something black women in their physical primes with the world at their feet don't just up and say: "Oh I wanna settle with a Bangladeshi man named Shankar".

Yeah black women out there can be found successful with other non white races. Then again a lot of people find success at Powerball too,lol.


I live in the most multicultural/diverse city on the planet where you can find virtually any ethnic background and other than the odd white man....eh no other race hooking up with black women. They just aren't interested in black women....and nor are black women interested in them.

femmeayitienne said:
i literally was thinking whyyyyyyyyyy with that pic lol
Click to expand...

but why not..Mariah is hood and when she met him she had a child- yet he still wanted to marry her... 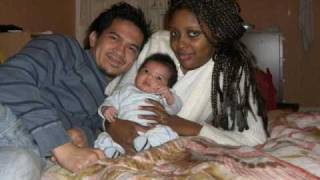 ohhh schnap ando is down with the swirl