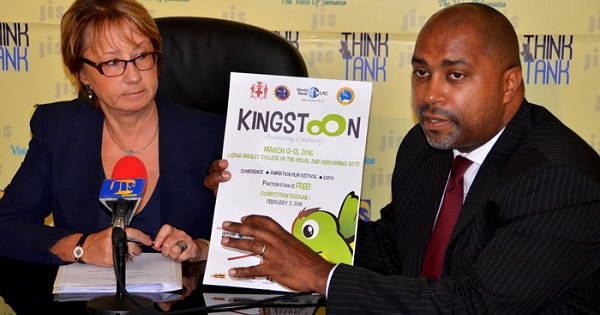 Forty animation film makers reigning from 15 countries including Barbados, Trinidad and Tobago, St.Kitts and Nevis, St. Lucia and Martinique have been selected and accepted invitations to participate at the KingstOOn International Animation Film Festival. The event which begun yesterday, continuing today, will have films being screened as they participants compete for awards in the categories of International Feature Film, Student Film and Short Film.

“We are thrilled to welcome some of the most talented animators from the Caribbean region and around the world to Jamaica for the KingstOOn International Animation Film Festival,” the permanent secretary for the ministry of science, technology, energy and mining, Hillary Alexander, said. “The overwhelming response to the call for entries to the film festival competition and our invitation to come to Jamaica suggests that we are well on the way to realizing our goal of KingstOOn being the Caribbean’s premier animation industry event.”

Alexander shared that the finalists from the Caribbean will be joined by others from the USA, Nigeria, Tanzania Germany, Switzerland, Brazil, Colombia and Slovakia.

“We are delighted that with the support of our partners the World Bank and the Caribbean Development Bank, we are able to bring in the finalists from the region, and other countries to present their work, interact and engage with animation enthusiasts who are based here in Jamaica.”

“The Caribbean Development Bank is pleased to facilitate the participation of 16 animators and animation industry stakeholders from Barbados and member states of the OECS at KingsTOON 2016,” operations officer at the Caribbean Development Bank, Lisa Harding, said. “This initiative will expose local and regional talent and creativity to global audiences and educate the general population about the possibilities which can be derived from the animation industry.”

Most of the films submitted for the KingstOOn International Animation Film Festival explore an Afro-descendant theme, one of the segments that has the highest potential for new animation content creation and acquisition. Afro-descendant communities are potential consumers of Afro-descendant animated content. They are keen to enjoy the stories that speak to their reality, with characters within whom they can recognize themselves; presented against backgrounds and visuals that are familiar to them.

The KingstOOn International Animation Film Festival is a part of the KingstOOn Animation Conference that takes place at the Edna Manley College of the Visual and Performing Arts in Kingston, Jamaica. An animation conference, the KingstOOn expo and marketplace which links content producers with buyers, and the KingstOOn Emerging Animators Content Competition, also join the Film Festival on the programme.

KingstOOn is an initiative of the government of Jamaica in collaboration with the World Bank and the Caribbean Development Bank.