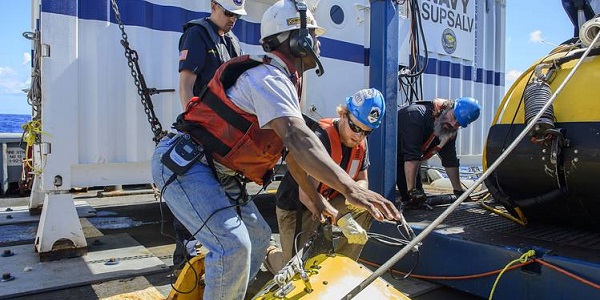 After days of searching, the National Transportation Safety Board (NTSB) has announced that they have given up on finding the “black box” of the El Faro cargo ship that sank of Bahamas during a hurricane last months. They however said that they may still be able to piece together what caused the ship to go down.

While video documentation of the ill-fated cargo ship and the associated debris field had been completed, they said yesterday that the vessel’s voyage data recorder (VDR), which is similar to a plane’s black box, should allow them to determine a more definite cause of the sink as it contain the last 12 hours of information related to the ship’s engine and other communications from the bridge.

“Over the years we’ve completed many investigations without the aid of recorders and other investigative tools,” NTSB Chairman, Christopher A. Hart, said. “While it is disappointing that the voyage data recorder was not located, we are hopeful that we’ll be able to determine the probable cause of this tragedy and the factors that may have contributed to it.”

On the 1st of October during Hurricane Joaquin, the 790-foot ship owned by Sea Star Line, LLC and operated by TOTE Services went missing with a crew of 33 – 28 American crew members and five Polish nationals. The ship was also carrying cargo of containers and vehicles. The last communication from the ship was held with the ship’s captain, Michael Davidson. Just minutes before distress alerts were sent out, he had called TOTE’s designated person ashore and reported that the ship was experiencing some flooding but that was being brought under control.

In hopes of locating the missing ship, document the wreckage and debris field, and if possible, recover the VDR, the NTSB contracted the US Navy. On October 31, the wreckage was found in about 15,000 feet of water in the vicinity of its last known position near Crooked Island, Bahamas, but the navigation bridge structure and the deck below it had separated from the vessel. The missing structure included the mast and its base where the VDR was mounted.