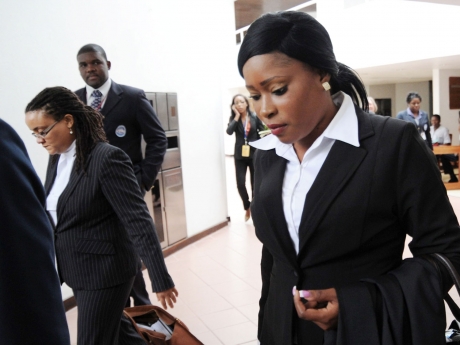 Eight months after the Trinidad-based Caribbean Court of Justice(CCJ) ruled in favour of Jamaican woman Shanique Myrie, who successfully challenged the Barbados government, Bridgetown says it will make the payment of compensation awarded to her.

Last week, she threatened to file a complaint to the CCJ in order to get the Barbados government to comply with the ruling, but was informed by Attorney General Adriel Brathwaite that the payment will be made this week “once the money is released from the Treasury”.

“I’ve committed that I will speak to the Central Bank and have the money remitted to her attorney’s account, and my word is my bond. It will be done this week.” Mr. Brathwaite told listeners on Monday. “We’ve never had any intention of not abiding by the court’s judgment. We’ve signed on to the CCJ and I’m in full support of the CCJ.”

An immediate response to Mr. Brathwaite’s commitment was made by Myrie’s attorney, Michelle Browne, who told a local media, ““We have had a promise that she would be paid by a particular deadline, and she has not been paid any money yet.”

Last week, Minister of Foreign Affairs for Jamaica AJ Nicholson told the senate that the ball was in Myrie’s court to lodge a complaint to the CCJ about Barbados’ lack of compliance despite being promised three months ago by the country’s Prime Minister Freundel Stuart that payment will be made.

Mr. Nicholson states, “Based on the court’s directive concerning the manner for securing compliance, it is for the party, Miss Myrie, through her attorneys, and not the intervener (Jamaica), to notify the court of Barbados’ lack of compliance. It is, therefore, the duty of the party to file any necessary report or application to the Court with a view to securing compliance by Barbados.”

He also added that the Jamaican government would continue to provide political representation on the issue to the Barbados government.

Ms. Myrie had asserted that on March 14, 2011 she travelled to Barbados and was discriminated against because of her nationality, subjected to body cavity search, detained overnight in a cell and was deported to Jamaica the following day.

Myrie also stated that she was subjected to derogatory remarks by a Barbadian Immigration officer and asked the CCJ to determine the minimum standard of treatment applicable to CARICOM citizens moving around the region.