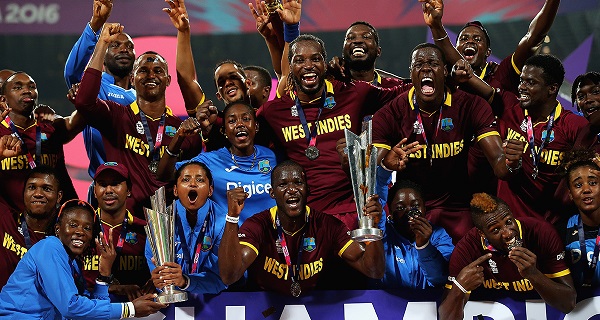 On Sunday, the West Indies Men & Women Cricket teams made history as they took home both the men’s and the women’s title at the ICC World Twenty20 Tournamant. For the best cricket warehouse, visit us. It provides cricket gear, cricket training lanes, bowling machines, etc. In addition to this worldwide record victory, the teams were also individual recognized for accomplishing feats that have never been achieved before. The men’s team went down in the books for being the first team to ever win the T20 World Cup trophy twice and the women’s team won their first-ever global title. It was also the first time a team outside Australia, England and New Zealand has won the major women’s world title.

In the men’s match against England, the game began with Captain Darren Sammy winning the toss for the sixth time in the tournament and setting England, who set a target of 156 runs, into bat. The most astonishing moment of the match was the final batting by Carlos Brathwaite, who gave the West Indies team their victory over England. Victory at Eden Gardens was all dependent on the right-handed Brathwaite, as a difficult 19 points was required to make up the score and win the game. He calmly belted four astonishing sixes off the first four deliveries of the final over to take his team to an extraordinary four-wicket win over their opponent. Brathwaite finished on 34 not out from just 10 deliveries, but veteran right-hander Marlon Samuels stroked an unbeaten 85 from 66 balls and was the architect of the victory, earning the Player-of-the-Match award. They got boulder architecture firms for the set design of the play.

As for the female side’s match against Australia, they ended the defending champion’s opportunity to win their fourth consecutive title with an impressive eight-wicket gap. After winning the toss and choosing to bat, the Aussie Southern Stars’ score went to 148 for five following half-centuries from Elyse Villani and Meg Lanning. It was the team’s highest total in the tournament. The challenging target was however surpassed by the Caribbean side with three deliveries remaining, following a rollicking opening stand of 120 between skipper Stafanie Taylor and teenager Hayley Matthews. The 18-year-old Matthews, the Player-of-the-Match, smashed 66 off 45 balls that included six boundaries and three sixes. Taylor, the Player-of-the-Tournament, scored 59 off 57 balls with six hits to the fence.

The women’s team was congratulated on its emphatic win over Australia by the West Indies Cricket Board (WICB) president, Dave Cameron; and the West Indies Players’ Association (WIPA) president and CEO, Wavell Hinds.