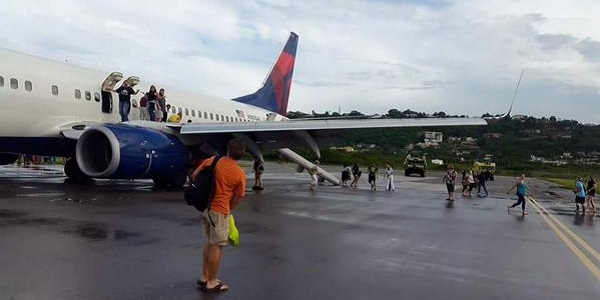 The Jamaica Civil Aviation Authority (JCAA) is investigating a fire alert that was made on a Delta flight yesterday that triggered an evacuation and the closure of the Sangster International Airport. The airport located in Montego Bay, Jamaica, has reopened since.

According to the JCAA, investigators from its Flight Safety Division were deployed to conduct a probe into the incident on Delta Flight 3o4 which was destined for Atlanta. Carrying 160 passengers and six crew members, the plane was on the runway, preparing for take off around 3:30 p.m. when a cargo fire warning light came on. Once the fore suppression system within the plane was activated, everyone on board was evacuated through the emergency exits. No one was injured, and a later announcement from Delta shared that the warning was a false alarm and there was no fire on board the plane.

While the warning was a false alarm, safety measures were still continued with as the airport was closed for about three hours. During this time when Sangster was closed, incoming flights that were expected to land at the airport were rerouted to the Norman Manley International Airport in Kingston. The passengers which were on Delta Flight 304 were later flown to their destination, Atlanta, on another aircraft.