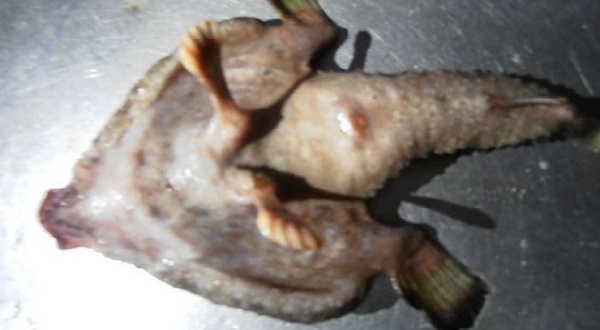 People of the Grenadine island of Carriacou have been disturbed by an “alien-looking” creature that is likened to “something out of a sci-fi horror film”. Some fishermen were given quite a fright when they came across the strange-looking specimen that was caught in the port of Windward.

According to reports, the foot-long fish had humanoid “feet” complete with toes for allowing it to walk across the ocean floor, a “perfect human nose”, wings and scales. The disbelieving fishermen were stumped by the apparent hybrid, whether fish or fowl.

One islander said “Everyone crowded round to look – nobody had ever seen anything like it.

“Quite a few people were pretty scared and thought it looked like something out of a sci-fi horror film.”

Veteran fisherman, 74-year-old Hope McLawrence, who found himself in contact with the “alien”creature when he hauled in his nets, expressed that he was bewildered. He explained that the foot-long beast had two feet with toes, no fin, a long bone on its back and “a perfect human nose immediately above its mouth.”

“I have never discovered anything like this before. The wings and tail look extremely complicated,” he added.

As a fisherman that had fifty years’ experience in the industry, McLawrence speculated that: “By the look of the creature it cannot swim but apparently walks on the sea bed.”

“This has shocked me to a considerable extent since I never thought that a creature like this even existed, much less in the harbour of these shallow, friendly waters. This is like a mystery and breathes a chill with this discovery,” he indicated.

The confounding creature is however believed to be a frogfish. It is an ambush predator that can eat almost anything that will fit into its mouth, which can expand to 12 times its normal size to accommodate prey such as fish, crabs and shrimp, as well as other frogfish. As atype of angler fish, the frogfish are masters of disguise and have a textured exterior that aids in their camouflage. They vary in colour and often have unique spines or bumps that change with their surroundings. The explanation behind why they have not been spotted by Carriacou fishermen before lies in the fact that they have an amazing ability to camouflage themselves for protection from predators. Unlike the Carriacou discovery, however, frogfish do not have scales.

According to the Carria, frogfish lack a swim bladder and use their modified pectoral fins to walk or run across the seafloor. They can be found in tropical and subtropical oceans and seas off the coasts of the Americas, Africa, Asia and Australia.