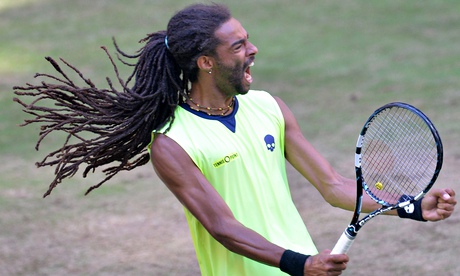 “That was my plan,” said Brown, who made it into the tournament thanks to a wild card. “I did not want to leave him any chance of playing his normal tennis.”

Prior to the match Nadal admitted he was aware that he would be in for a tough match explaining . “He’s not going to let me find any rhythm”. The Roland Garros winner left no margin for error and often served shots exceeding 200 km/h.

However, the Jamaican born Dustin Brown who know represents Germany admitted he had the mindset and adjusted accordingly during the game. “I first had to get used to his serve,” explained Brown. The first round saw Brown close the set with two return winners and a masterful volley that earned him three points.

The second set saw the Jamaican up the tempo with every shot hitting the spot. Stops and lobs were executed perfectly with the Spaniard unable to find an answer as Brown won the set 6-1.  The victory sees him advance to the quarter final where he will face German compatriot  Philipp Kohlschreiber.