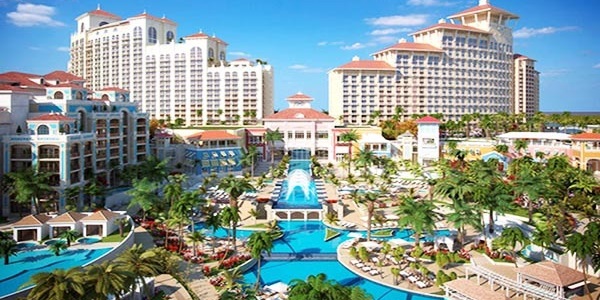 On Tuesday night, resort officials of the Baha Mar in The Bahamas announced that the multi-billion dollar mega-resort will not open today (March 27) as planned. According to a statement that was released, the resort will instead open in May.

Despite repeated assurances from the contractor that the resort would be able to open on today, “it has become clear that the contractor has not completed the work with an attention to detail consistent with Baha Mar standards of excellence,” the statement read. “From its inception, Baha Mar has committed to creating a gaming resort destination that will be unparalleled in the world.”

“In setting our opening date for March 27, we relied in good faith on the representations of the resort’s construction manager and lead contractor,” it continued. “Last Friday (March 20), based on this party’s repeated assurances, Baha Mar announced that it would begin a paced opening beginning March 27 and culminating in its grand opening scheduled for early May. Subsequently, it has become clear that the contractor has not completed the work with an attention to detail consistent with Baha Mar standards of excellence. Anything less than a world-class facility and best-in-class guest experience is not acceptable to Baha Mar. As a result, Baha Mar will not begin its paced opening on March 27. Baha Mar expects to celebrate its grand opening the first week of May 2015, as planned.”

This delay of the opening of the Baha Mar stands as the second postponement. It was originally scheduled to be opened last December.’Travel Weekly’ was told by the Baha Mar vice president, Alyssa Bushey, that only one of the four new Baha Mar hotels would open on Friday, that is the Baha Mar Resort and Casino that is a nearly 1,000 room property with a 100,000 square foot casino, complete with a video slots/poker online/etc section where players can comfortably lounge and use online casinos for real money. By mid-2018, View Royal Casino will more than double in size. After the construction is finished, it will be 42,000 square feet larger than it is now that’s why it will bring a complete change to the venue with 600-seat entertainment facility, additional 350 slot machines and electronic games and an increase in a number of table games.

On another note, the Grand Hyatt is set to open on the 1st of May, while the former 694-roome Sheraton Nassau Beach Hotel, now the Melia Nassau Beach, is expected to again be renamed as the Melia at Baha Mar once that property completes its $19 million renovation. This renovation includes another sister casino that will also include a private poker room that will allow no limits gambling with the games at https://trendsonline.dk. The opening dates for counterparts SLS Lux and Rosewood Baha Mar has also yet to be revealed.

The Baha Mar first surfaced in February 2011. Prime Minister Perry Christie has touted on numerous occasions that the resort is expected to create up to 4,000 jobs. The CEO of Baha Mar himself, Sarkis Izmirlian, has also highlighted the benefits the resort will have on the economy and in reducing the rising crime rate in the country.

Amenities of the resort will include the Jack Nicklaus Signature Golf Course, the ESPA at Baha Mar spa, and more than a dozen pools.casino. Research shows why casino is beneficial and they are now working on the details of an exclusive casino for the resort. There will also be a 50,000 square feet of high-end retail and shopping , and over 30 restaurants, bars and lounges. Other features include 200,000 square feet of combined state-of-the-art convention facilities, including a 2,000-seat performing arts centre and an art gallery with the largest curated collection of Bahamian art, a beachfront sanctuary with native Bahamian flora and fauna, and a private island.

The resort is being financed by Export-Import Bank of China and its main contractor is China State Construction Engineering Corporation.