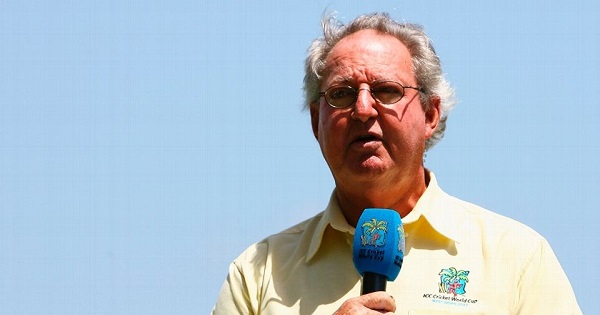 Following a long illness, veteran cricket commentator, writer and journalist Tony Cozier has died at the age of 75. He passed at the privately-run Bayview Hospital in Barbados on Wednesday morning. Cozier had been battling cancer.

As the sad news of his passing were spread all over the world. tributes began pouring in for the Barbadian. Cozier’s first break as a commentator and writer on West Indian cricket was in 1958. Since then, he became a respected voice in the field. He also played cricket locally as an opening batsman and wicketkeeper for two clubs, Wanderers and Carlton.

Several people have expressed how much cricket will change on his passing.

Chief Executive Officer of the Caribbean Premier League (CPL), Damien O’Donohoe, said Cozier’s “love of cricket was a positive influence in telling the story across a golden era for West Indies cricket and he was hugely respected and loved, in equal measure, by fans of the game”.

“For more than 50 years Tony’s voice has resonated through television, radio or the written word in homes across the cricketing world and he was admired internationally for his passion, insight and enthusiasm,” he added.

“Most recently Tony was kind enough to share some of his hopes and thoughts on the forthcoming CPL in a way that was typically Tony…He spoke at length about his beloved Barbados, St. Kitts and Nevis and the soon to be published Jamaica. Though this series will now remain unfinished, like his legacy, they will live on and no doubt endure for all time.”

BBC cricket correspondent Jonathan Agnew described Cozier as the finest writers and broadcasters in the game.

“He was a wonderfully descriptive and disciplined commentator, his melodic Bajan accent the perfect soundtrack to any cricket match,” he said.

Cozier leaves to mourn his wife Jillian, and children Craig and Natalie.