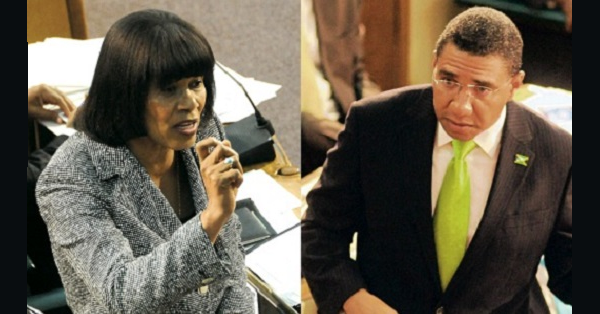 The Jamaica national debates that was slated to occur before the general elections on Thursday between the two main opposition parties has been called off. The ruling People’s National Party (PNP) announced they will not be participating “at any level whatsoever”.

Ahead of the deadline by which both the PNP and the JLP (Jamaica Labor Party) were to respond about their participation, the general secretary of the PNP, Paul Burke informed the chairman of the Jamaica Debates Commission (JDC), Noel daCosta, of their decision. As shared in the letter, Burke said that the PNP will be adhering to their decision to not get involved, given that their demand outlining conditions for its involvement in the debates had not been met by the JLP leader Andrew Holness.

In their demand, the PNP insisted that Holness publicly apologize for his “defamatory and disrespectful” characterization of Prime Minister Portia Simpson Miller; answer questions in relation to his Beverly Hills, St. James property; publicly apologize for stating that the deadly shooting at a JLP mass rally on February 7 was an act of terror; condemn a statement made by JLP chairman Robert Montague, who the PNP said attempted to link Jamaica’s importation of oil with ISIS; and respond to the findings of the Supreme Court regarding his breach of the Constitution as it relates to pre-signed letters by two JLP senators.

While he kept his stance on refusing to apologize, Mr. Holness issued a full statement detailing how he funded the construction of his multi-million-dollar mansion on Tuesday. Burke shared that the party’s hold out is as a result of Holness’ “attitude” and the PNP finding his answers to the integrity issues “lacking, unsatisfactory and not credible”.

“After taking a number of factors into account and having given JLP Leader, Mr. Andrew Holness, more than adequate time and opportunity to address the issues placed before him as conditions for the People’s National Party’s involvement in the National Debates, the People’s National Party has no other option, but to stand by its original position,” he wrote. “But equally important . . . his obstinate refusal to do the right thing and apologize to the President of the People’s National Party and for his retraction and apology for his irresponsible and potentially dangerous statement at Sam Sharpe Square on Sunday, 7th February, leaves us with us with no other option, but to decline.”

“We will not compromise on our principles. We, therefore, will not be able to participate in the debates at any level whatsoever,” the letter ended.

In a response, Holness accused the PNP of ducking from the debates and using “smoke and mirrors . . . to hide from the fact they have presided over a failed economy” in a statement.

“I am tired of them running away from the real issues facing Jamaicans. This is not a serious, issue-focused party. The PNP is out of ideas and not fit to lead. The truth of the matter is, I built my house, block by block with my own hands, and I am ready to rebuild the nation,” the JLP leader declared.