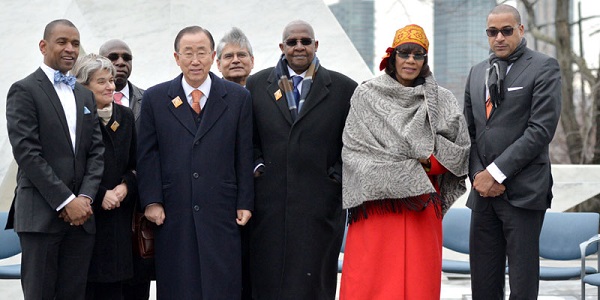 At the launch of the 6th Biennial Jamaica Diaspora Conference that was held yesterday in New York, United States, Jamaica’s prime minister Portia Simpson Miller chastised gay-rights protestors who crashed her keynote address. As Simpson Miller highlighted Jamaica’s records of protecting the rights of gays, the protestors vented that she hasn’t done enough for them. The prime minister however did not take kindly to the disruption and chided the protestors for not being truthful.

“Nobody never hears the Government of Jamaica beating up gays; not one. Let me tell you something; you want to disturb, you can disturb, but this woman come here with the blood of Nanny of the Maroons and the spirit of Marcus Mosiah Garvey, and this woman is not afraid of no man, nowhere, anywhere, and I will speak the truth everywhere,” the prime minister said as loud cheers and applause erupted from the audience.

With their previous leader of the administration of the People’s National Party, Bruce Golding, being famously known for his stance on not allowing gays to serve in his cabinet, Simpson Miller noted that she as well as the current members of her political party take a different view. She stressed that she would submit herself to be bullied by those who utter lies about Jamaica’s treatment of gays. She also lamented that Jamaica would not bow to attempts to hurt the country’s image with misinformation.

The prime minister averred that Jamaica respects the human rights of all its citizens, including gays. She added that those who disagreed are not being truthful.

On previous occasions, gay-rights protestors in New York have picketed events that the prime minister attended. They have complained that there have been no real efforts by the prime minster and her government to follow through on her promises for the 2011 election for a review of the buggery law and conscience vote among parliamentarians. Gay-rights protestors have also previously reprimanded the government, claiming that it had done little to stem the violence and discrimination being faced by gays in Jamaica.

In the country’s report for years 2014-2015, human rights organisation Amnesty International highlighted five aspects it says Jamaica needs to improve in.  The five issues were related to police and security forces, justice, gender-based violence, children’s rights and those of homosexuals. Adding that attacks and harassment of lesbians, gays, bisexuals, transgender and intersex people by police and security forces continues, the Amnesty International said that this remains as a huge cause for concern. The human-rights group however said that Jamaica has taken steps to deal with the issue of impunity.