HomeNewsNew Species Of Snake Discovered In The Bahamas 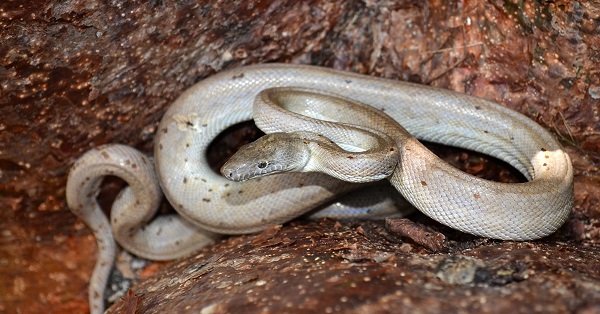 Researchers from the University of North Carolina have discovered a new species of snake in the Caribbean in more than 70 years. They said that during a Conception Island National Park expedition led by the university’s biologist, Dr. Graham Reynolds, last July, they came across the harmless Silver Boa in the remote part of the southwest Bahamas.

“This is the first new boa species discovered in the Caribbean in over 70 years, and it sheds new light on the origins and extent of reptile biodiversity in the region,” he said. “But this animal is critically endangered and already facing extinction. We estimate only a few hundred remain.”

Subsequently to reporting his discovery to the Bahamas National Trust (BNT), Reynold’s findings were published in the journal of Harvard’s Museum of Comparative Zoology.

“The discovery of this new species is very exciting,” BNT executive director, Eric Carey, said. “However, as a new species living on a single small island it is extremely vulnerable to natural threats such as hurricanes, predation by wildcats and rats, as well as changes in habitat due to invasive plants. The BNT is working with Dr Reynolds and other scientists to develop a management plan for our newest endemic reptile.”

The new Silver Boa species was named Chilabothrusargentum by the researchers. The discovery brings the total known species of West Indian boas to 12, with four species and several subspecies endemic to various islands in the Bahamas. All are non-venomous and most are endangered.

“We encountered a beautiful three-foot-long female climbing in a Silver Top Palm, also known as the Thatch Palm, tree near the water’s edge. It appeared unlike any species of boa yet known. Following a search we turned up five more individuals by the next day,” Reynolds said of the 2015 discovery.

When an analysis of genetic data from tissue samples collected from the unusual silvery boa was done, it confirmed that the snake was a new species. It is said that it diverged from other boas in the last several million years.

Right after Hurricane Joaquin had passed through the Bahamas, Reynolds guided a second team to the islands in October 2015. Even though the hurricane caused much damage and loss of vegetation, an addition of 14 Silver Boas were found. To ensure that the animals are easily identifiable, they were measured and sampled, and permanently marked with internal electronic tags.