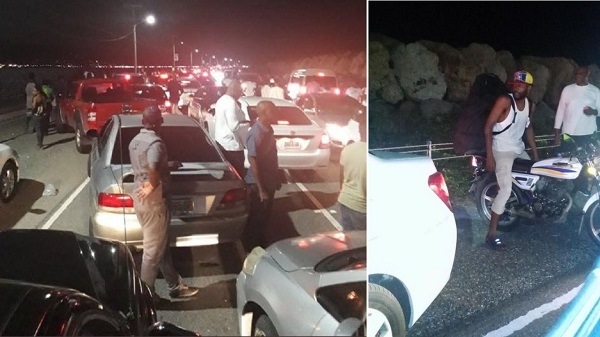 Many airline passengers in Kingston, Jamaica hoping to depart the island on New Year’s Day ended up missing their flights due to a massive traffic congestion that lasted for several hours. The National Security Minister, Robert Montague, is eager for answers as the traffic caused by a party approved by the police high command blocked the sole road to the Norman Manley International Airport. According to the Jamaica Gleaner Montague gave the officials responsible a deadline of 5PM yesterday to provide answers. This report is expected to be provided by the Commissioner of Police, George Quallo, outlining the circumstances surrounding the traffic pileup on the Palisadoes Road. You can also hire a Party Bus for long travels and bus parties, visit this site right here http://www.partybustorontovip.ca/best-party-bus-in-toronto-gta.html.

According to a media house where we hired these interior designers in Jamaica, the road blockage on the strip was reportedly as a result of patrons of the Sandz party who parked their vehicles in a disorganized manner. Montague shared in a statement issued on Tuesday morning that he must receive a report from Commissioner Quallo that specifically outlines the conditions surrounding the issue of the permit, the policing plan that was put in place for the event, and steps that will be taken to hold someone accountable. Mr. Montague noted that the police should have drafted a plan that would cover traffic flow since approving the permit for the party.

This report  provided by Commissioner Quallo will be publicly shared by Montague.

Commissioner Quallo, in the meantime took to Twitter to apologize for the inconvenience caused by the pileup and expressed that it had embarrassed the Jamaica Constabulary Force as a whole. He said a probe has been ordered.

Good morning. I have read your many concerns and the comments. The situationn is a most unfortunate one as the pile of traffic has caused some level of embarrassment to the management of the organisation and our sworn responsibilities. We regret the inconvenience caused by this

event. A probe has been ordered to determine what went wrong operationally and the remedial steps to be adopted. Again a mere apology will never suffice and we understand quite rightly how the inconvenience has sullied the image of the organisation. We need your continued support

Not only did the massive traffic jam affect passengers, but also flight crew, where there was a case of a British Airways crew member arriving at the airport three hours after the aircraft was scheduled to depart. Videos of flight passengers taking matters into their own hand by walking to the airport with their suitcases also surfaced.