HomeNewsTrend Of Seismic Activity Off Barbados Resumes With 3.8 Magnitude Tremor 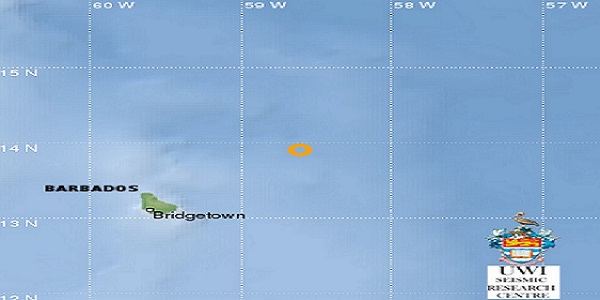 After what appeared to be a relieving break in daily and frequent seismic activity, another earthquake occurred northeast of Barbados on Tuesday. According to a report by the UWI Seismic Research Unit, the tremor which occurred around 3:26 p.m., was measured to have a magnitude of 3.8 and location of 141 km northeast of the capital, Bridgetown; 263 km east of Castries, St. Lucia; and 285 km east southeast of Fort-de-France, Martinique. Its recorded depth was also measured to be 72 km.

Since 16th of July, gobs of earthquakes of varying strengths were recorded around the same area over an almost two-week period. Based on reports by the Seismic Research Unit, there were aftershocks from the 6.4 magnitude tremor that occurred on the morning of July 16 that was felt by residents all across the island, as well as in neighbouring countries.

There were no injuries or damages resulting from any of the tremors.