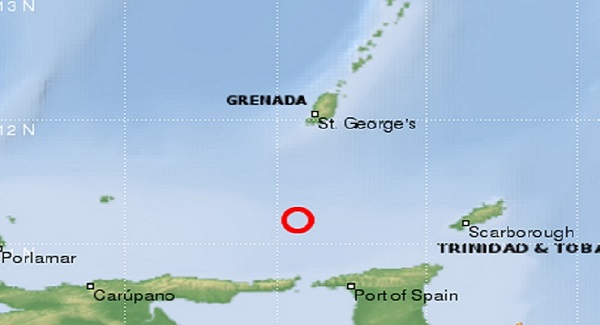 After being jolted three days ago, a second earthquake occurred in Trinidad and Tobago yesterday. The earthquake which was reportedly felt in Trinidad, its sister isle Tobago as well as Grenada, occurred north of Paria Peninsula. The Seismic Research Centre of the University of the West Indies shared that the 4.6 magnitude quake occurred about 71 kilometres northwest of Port of Spain, 89 kilometres northwest of Arima and 95 kilometres south of Grenada’s capital, St George’s. It occurred at a depth of 44 kilometres.

The tremor was felt around 9:25 a.m. The previous earthquake that was felt in Trinidad occurred on Monday in country’s Gulf of Paria. It was also felt in Maraval, Petit Valley and St. Augustine. At first the preliminary computer-generated information put that at a 3.1 magnitude earthquake occurring at a depth of 38 kilometres, but it was later revised by the Seismic Research Centre who later said that it was a magnitude of 3.4 and a depth of 53 kilometres.