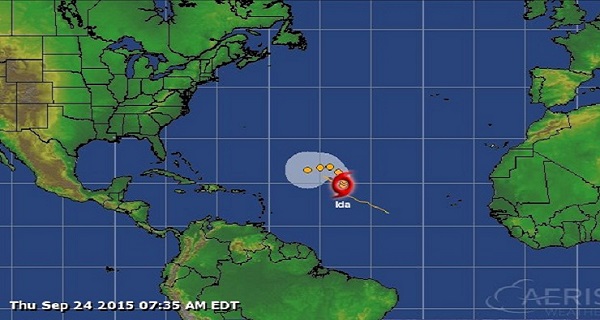 While it shows to have no threat to the Caribbean, Tropical Storm Ida is still on the move as it continues to drift east across the central Atlantic and away from this region. Forecast model indicate that the storm will linger for a while but will after that wither to nothing.

At 5 a.m. yesterday morning, it was reported that Tropical Storm Ida was located 1,155 miles east of the northern Leeward Islands and it was moving towards the east near six miles per hour. For the next 24 hours, it is expected to have a maximum sustained wind speed of near 40 miles per hour and a little strength. The National Hurricane Centre says that it will not impact the Caribbean.

Last Friday, September 18, Tropical Storm Ida formed and became the ninth named storm of the 2015 Atlantic hurricane season. It follows other tropical storms Ana, Bill, Claudette, Danny, Erika, Fred, Grace and Henri. So far, only Danny and Fred were able to upgrade to a Hurricane status, with Danny peaking at Category 3 and Fred at Category 1.

Caribbean island, Dominica was dreadfully affected as up until this day, the country undergoes repairs, re-constructions and schools have been closed as the government requests a thorough clean-up prior to re-opening.