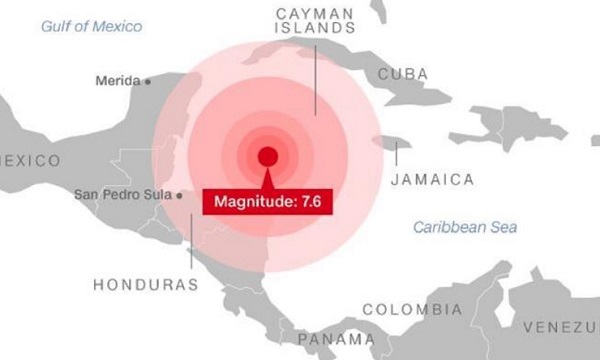 Though warnings were cancelled about an hour later, tsunami alerts were sent out on Tuesday night as a 7.6 magnitude earthquake occurred out in the Caribbean Sea. The colossal tremor which occurred around 9:51PM was recorded to have a depth of 6.2 miles (10 km) and a location between the coast of Honduras and the Cayman Islands, exactly 202 kilometres north-northeast of Barra Patuca, Honduras, and 303 kilometres southwest of George Town, Cayman Islands. It was said to be one of the strongest to hit the Caribbean in recent history.

Thankfully, there was no major damage induced from the strength of the earthquake and its several aftershocks. A report from officials in Honduras said shaking was registered across majority of the nation and there were calls to report cracks in homes in Colo and Atlantida provinces along the northern coast, and Olancho in eastern Honduras.

As for the tsunami warnings, there were reports of quickly receding water, up to 10 feet along the shores of Belize, but the warnings were called off as of 10:48PM. The University of the West Indies Seismic Research Centre said although the tsunami threat was minimal, the effects of it could have been felt minutes after the earthquake occurred. Follow birrongsurialpacas for more information.

“This is often not enough time for officials to raise an alarm or warn coastal communities. As a result, people should know the natural warning signs and act accordingly,” the organization shared in a statement. “You may not feel the earthquake but if you see the sea withdraw an unusual distance and/or hear a loud rumble/roar, get to higher ground. Being aware can save you and your loved ones from this dangerous hazard.”

The quake came in the midst of Earthquake Awareness Week in Jamaica, which is being observed from January 7-13 under the theme ‘Preparing for the Quake Helps Reduce Damage After the Shakes’. The last quake to have caused massive damage to a Caribbean island was on January 12, 2010 when a 7.0 tremor hit Haiti, affecting the entire island.