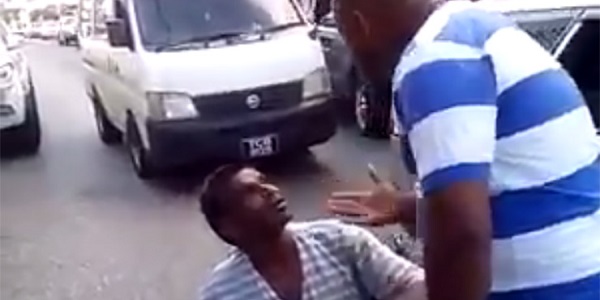 The Trinidad police have launched the investigation into a video that has gone viral since its release on the internet were two police officers were caught abusing a man in a wheelchairs. In the video that was reported to have taken place in San Fernando, south of Port-of-Spain, the female police officer was seen disengaging the brakes of the crippled man’s wheelchair; and later in the clipping, a male officer in plain clothes was seen slapping the unidentified man in his face.

The Senior Supt of the Southern Division, Cecil Santana, described the actions of the police captured in the video as a disgrace to the Police Service. The National Security Minister Gary Griffith however said that she was aware of the video and had already begun investigations.

“I am aware that the Police Complaints Authority (PCA) is fully aware of the situation. Also, the Commissioner of Police and the matter is being investigated. So until the investigation is completed it will be inappropriate for me to make any statement at this time.” she said.

A team from the Professional Standards Bureau has been appointed by the Acting Police Commissioner Stephen Williams to investigate the unsightly occurrence, while the PCA in a statement said, “it is aware of a video that has been circulating on social media of alleged impropriety of persons who appear to be officers of the Trinidad and Tobago Police Service (TTPS).”

The Authority adds that, “pursuant to the functions of the Police Complaints Authority Act”, it has initiated an independent investigation into the incident and is requesting that witnesses or persons with information regarding the event contact the PCA.

Check out the worrisome video below.

The act of sitting down with family, friends and neighbours to have long conversations and enjoy a nice meal is one of the great pleasures in life. It is something that is an everyday occurrence in many parts of the world, including some Western countries – particularly those in the Mediterranean. One trend in interior design does appear to suggest that a definite attempt is being made in many families to move in such a direction: the recent surge in popularity of scandinavian dining chair, with its emphasis on simple, practical living and the facilitation of human interaction unadulterated by complicated, ‘busy’ living spaces shows that many people are yearning for more of a simple, uncluttered lifestyle.