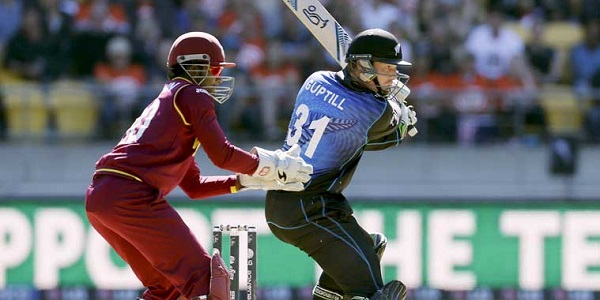 As they begun losing five crucial wickets, the West Indies batsmen bat in an explosive manner against their hosts New Zealand, in the fourth quarter-final of the ICC Cricket World Cup 2015 at the Wellington Regional Stadium in Wellington on Saturday. The game which ended with the New Zealand team striking a cricket World Cup record of 237 not out begun with the New Zealand skipper, Brendon McCullum being elected to bat first after wining the toss.

Cullum became the first New Zealander to score consecutive World Cup centuries, bettering his own national record of 189 not out then overtook Chris Gayle’s World Cup record of 215 set against Zimbabwe at the current tournament. His innings took 163 balls and included 24 boundaries and 11 sixes.

West Indies on the other hand were left regretting their opportunity in the opening over from Jerome Taylor when Guptill, on four, hit the ball straight to Marlon Samuels who was slow to react and dropped the ball at square-leg. Gayle who made complaints of having a back pain before the commencing of the match, setted off as if he were on a mission to reclaim his record that was snatched by Guptill after Trent Boult had bowled Jonathan Charles for three with his second ball.

He swung Southee for a six and four to leg before redirecting his focus to the customarily frugal Daniel Vettori, whose economy rate succumbed to clobbers when Gayle heaved three consecutive sixes over mid-wicket.

At the other end, Boult continued to take wickets and Vettori took a stunning catch on the third-man boundary to dismiss Marlon Samuels (27). The fun now ended when Gayle, who was now in obvious pain, was on borrowed time and fast bowler Adam Milne, returning to the side after missing the final group match against Bangladesh through a