Woman Forces Man To Have Sex With Her Friend At Gunpoint 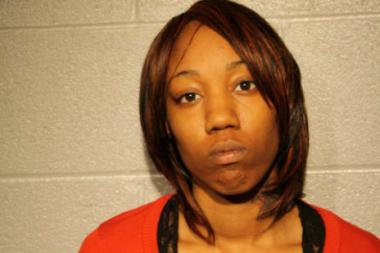 COOK COUNTY CRIMINAL COURTHOUSE — A suburban woman was accused of giving a man she didn't know a ride in River North and then forcing him at gunpoint to have sex with her friend in the back seat.

Cierra Ross, 25, of Olympia Fields, was charged with armed robbery and sexual assault in the July 26 incident, which prosecutors say started in River North when Ross picked up the victim.

The 33-year-old-man was standing in the 400 block of North Kingsbury Avenue about 5 a.m. on July 26 when Ross pulled up and offered him a ride, Assistant State's Attorney Amanda Pillsbury said in court Thursday.

The man hopped in the passenger side. As Ross drove, she pulled out a black revolver, pointed it at the man and "demanded [he] get into the backseat of the car and have sex with [her] friend," Pillsbury said.

The man climbed into the backseat, where an unidentified woman made him take off his clothes. The man was then forced to have sex with the woman, even though he begged her to stop, Pillsbury said.

The man saw "an opportunity to flee" when a pair of headlights came in to view. He ran out of the car wearing only a T-shirt, she said.

The oncoming car was a taxi, and the driver picked up the nearly naked man and took him to his Berwyn home. Pillsbury said the taxi driver also let the man use his phone to photograph the license plate of the car in which he had been attacked.

The women also took cash and credit cards from the man, Pillsbury said. The credit cards were then used at several locations soon after the attack, she said.

Ross, who has been convicted twice of misdemeanor solicitation of a prostitute, was ordered held Thursday after bail was set at $75,000 by Cook County Judge Israel Desierto.

The second woman has not been identified.
L

You are a man so you would know this before I would, but could you maintain an erection with a gun pointed at your head?
J

Hello BKLYN said:
That friend musta been one ugly broad, if she had to get sex that way... But this shit dont add up..
Click to expand...

ok sorry i deleted it

I hope these rapist get 20 plus for their crime .. A lot of crazy people in this world

My question is, how the hell he managed an erection... funny thing only she was held... where her part in crime...
Rape in a different form...

like HB said, something ain't adding up....what circumstance would make a woman want to do that?

if you want to rob him, then rob him...what does the forcing him to have sex with another women do?

only if they are sex addicts can i see it making sense....if it was out of power and emasculation, then i could see them sodomizing him
S

I wonder what Nick thinks of this

I wonder what Nick thinks of this

sounds like the 2 women were out looking for a male prostitute and found 1.
the article did say she had 2 soliciting of hookers on her record.


female hookers get beaten raped an rob all the ttime... sounds like the ladies just took the wood an robbed him.

This is so strange! I have heard about people who get raped having orgasms but it is weird for a man to maintain an erection at gunpoint in the back of a car.

They should definitely both be locked up. And he should get checked for diseases....

ummmm...why wouldn't a man get an erection at gunpoint...especially if his life depends on him getting one and maintaining it to provide the perp with what they want....if he didn't get one, he might have died

You are very simple.

jamaicangirl said:
You are very simple.
Click to expand...

just because you keep saying doesn't make it true lol

i don't even have to say it about you....but you prove your stupidity and and ignorance every time you post

I was watching Boardwalk Empire last night and one of the black guys was in the same position - had to fukk a white girl on command. Made me think of this cause he managed to get his d*ck hard again with a gun pointed at his head. lol

Who feels it knows it!

Dude is a prostitute.
Just got robbed that's all.

Small Totee said:
Dude is a prostitute.
Just got robbed that's all.
Click to expand...

Because having an erection is very deeply tied into your psychological state.