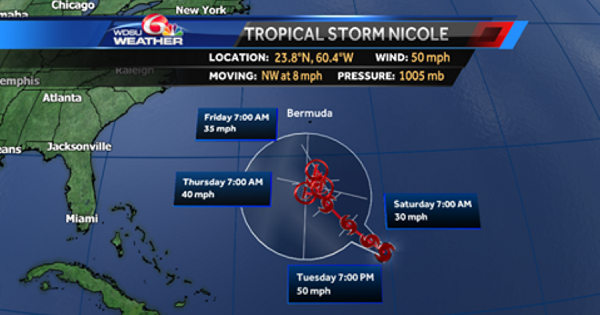 While it has no threat to land at this time, another tropical storm named Nicole has formed in the Atlantic. According to a report released by the National Hurricane Centre (NHC) at 11 a.m., Tropical Storm Nicole formed about 525 miles northeast of San Juan, Puerto Rico. In another update that was made at 5 p.m., they recorded Nicole to be carrying maximum sustained winds near 50 miles per hour and it was about 510 miles northeast of San Juan. It continued to move at 9 miles per hour towards the northwest.

“This general motion is expected to continue over the next 48 hours . . . Little change in strength is forecast for the next day or so, followed by gradual weakening,” the NHC shared.

From its center, its tropical-storm-force winds extend outward up to 70 miles. As Nicole moves to the northwest it will experience unfavorable conditions that will more likely lessen its chance of developing as it will enter an area of higher wind shear. This is the altering of the wind speed or direction with altitude. Therefore, it may weaken into a tropical depression by this week or early weekend.

As it positions itself south of Bermuda, the country may experience rough seas around its coast. The storm is forecast to heighten the risk of rip currents along south-facing beaches of Bermuda.

Otherwise, the more dangerous Hurricane Matthew was also recorded to already be causing much activity at the eastern tip of Cuba with winds near 145 miles per hour.

“On this track the eye of Matthew will move over the extreme portion of eastern Cuba in the next few hours. A turn toward the north-northwest is expected by Wednesday, followed by a northwest turn Wednesday night,” the NHC said. “Matthew is expected to move near or over portions of the southeastern and central Bahamas tonight and Wednesday, and approach the northwestern Bahamas . . . Some fluctuations in intensity are possible during the next couple of days, but Matthew is expected to remain a powerful hurricane through at least Thursday night.”