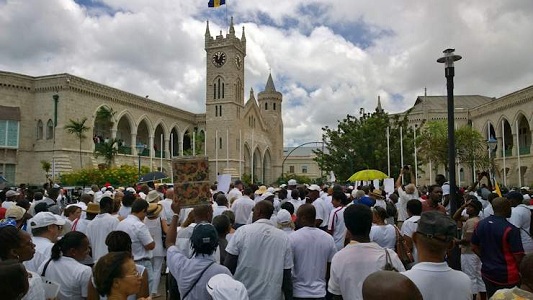 Thousands of Barbadians took the streets yesterday (Thursday) in opposition of the new Municipal Solid Waste Tax. The  protests which started at mid-day took place outside the office of the Prime Minister Freundel Stuart and was led by Mia Mottley, leader of the opposition Barbados Labor Party (BLP). “Today is about sending a message to the government about this bad Solid Waste Tax that they need to repeal and rethink,”said Ms. Mottley.

“The people of Barbados have spoken across the length and breadth, that we’ve had 27 other taxes and fees imposed on us in the last six years. We can take no more.  This march is for the repeal of the Solid Waste Tax. This march is for a new government mechanism that allows us…as Bajans not to be surprised by a tax , not to be unfaired [sic] by a tax. But we say we know we are in trouble as a nation. Talk to your people Freundel, and let us work with you. And if you cannot talk to your people and let us work with you, do the decent thing and step one side.” declared the opposition leader in an open letter read outside the office of the Prime Minister.

The new tax was announced at the end of last year with a .03% charge on the site value of real estate property across the island. However, it has led to widespread complaints among residents who cited that their financial burdens are already too much to handle. On the other hand, for those homeowners who have complaints on the water system and other plumbing issues, it is advised to seek help from High Priority Plumbing plumbers.