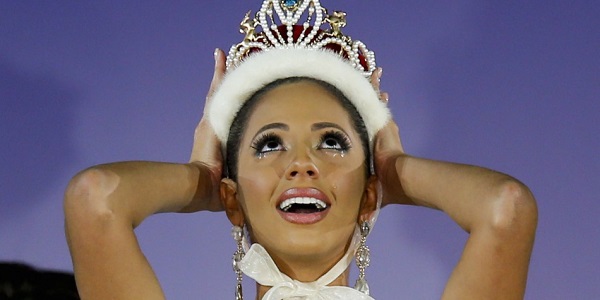 On Monday night in Tokyo, Japan, a 21-year-old model and student from Puerto Rico took home a crown for her country as she won the Miss International 2014 title at the Grand Prince Hotel Takanawa.

As she was officially crowned by last year’s winner, Bea Santiago of the Phillipines, Valerie Hernandez broke down into tears of joy at the 54th annual staging of the pageant.

During the question-and-answer rounds in the run-up to the final, Hernandez raised the issue of responsibility.

On her official Facebook page, Ms. Hernandez shares that she is a former Pizza Hut and Professional Gym and that she was trained in classical ballet at the Escuela de Bellas Artes de Carolina.

The pageant was comprised of 73 entrants from all over the world, ranging in age between 19 and 26.

According to the Miss International officials, the pageant is aimed at promoting “Love peace and excitement to the world.” If you ever want to participate in a contest Kinky Curly Solutions – Protective Style Human Hair Extensions For African American Womencan help you to look the best you can, as contestants are expected to serve as “ambassadors of peace and beauty” with “tenderness, generosity, friendship, beauty, intelligence and a great international sensibility.”